Action4Youth are an established, energetic youth charity who provide positive, often transformational experiences and activities which inspire children and young people. Their aim is to enable young people of all abilities and disabilities to learn to challenge themselves and work with others – learning what they can achieve rather than what they can’t.

Prior to engaging with Oxfinder, Action4Youth had invested in developing a brand identity, alongside growing the size and effectivnesss of the charity. Its visual identity across all marketing channels had become stronger and more coherent, and brand recognition was becoming more established amongst 9-18 year olds in the Buckinghamshire area.

Oxfinder were able to identify weaknesses in the charity's operations which were directly attributed to its website. Issues relating to poor functionality were causing unnecessary additional work loads for staff. Technical and user experience issues were also preventing the charity growing its online reputation, inline with the efforts it was making offline.

Planning & prototypes at the heart of eCommerce web design

After winning a competitive tender, Oxfinder planned, developed and relaunched a new website for the benefit of all users and employees, on time and on budget. Visit Action4Youth.org

The planning and pre-build stages included identifying a user interface and site structure which would promote the activities and achievements of the charity at the right time across all user journeys. This was further enhanced by establishing a content resource which would be used in the form of case study 'stories' by children, parents, staff, supporters and partners. To ensure that the journeys worked, and to achieve the best possible user interface, Oxfinder developed a fully working prototype of the website ahead of any design considerations. This focused client and developer thinking towards desired outcomes for every page on the website.

The build of the website also had to ensure that users could register or pay for activities, events and products. One of the most significant areas was The Duke of Edinburgh's Award where users can register and pay to join specific awards and expeditions based on their age and experience. Automated processes were then set up to deal with large volumes of applications and reduce manual work loads for Action4Youth team members.

The launch of the eCommerce website was delivered with team training to enable all administrators the ability to run the site themselves from day one. The timing of the launch was also critical, because the originally identified issues of the old site had continued to affect its performance, and eventually stopped working hours before the launch of the new site. The term 'perfect timing' could not have been more appropriate.

Do you need help with the design and development of a website delivering more traffic, more leads and more business? 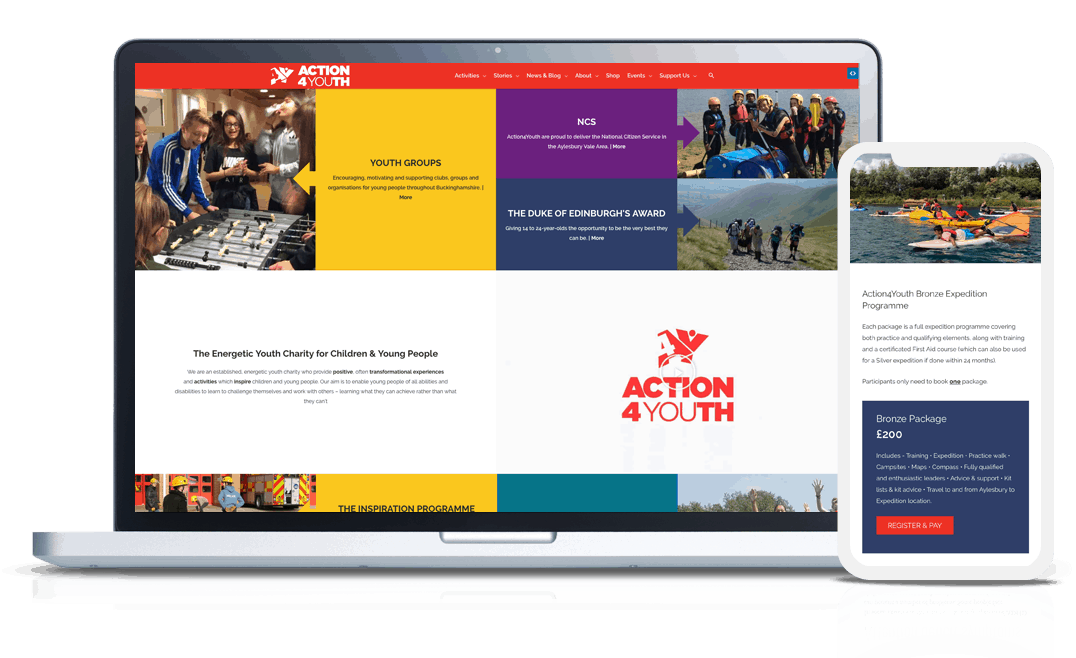 Based on an identified tone of voice from brand creative, all content written for the launched site.

Mandatory optimisation of each page.

100% accessible to users of all devices from mobile to desktop.

If you are looking for a web partner who will design and build a website or develop an existing one and can grow your online presence then look no further than Oxfinder. They have been excellent from start to finish and made a complex brief smooth and seemingly simple.

Action4Youth have a range of very different audiences from young people looking for information on our programmes and activities through to schools, parents and potential corporate partners, funders and grant makers looking for more complex information about what the charity does, how we work and the impact of what we do. This required very clear sections and signposts so that the site could be simply, appropriately and efficiently navigated by each user group. We also needed an efficient ecommerce system to work within it.

The Oxfinder approach was meticulous and helpful from initial scoping and advice to the final implementation. Every step was explained in language that we understood - giving complete confidence, clarity of process, rationale and benefit ensuring that we have developed a site does what we expect and need it to do from the launch and, coupled with their SEO expertise, we are experiencing a huge and beneficial uplift in our web traffic and visibility as a result.

Marcus and his team delivered (and continue to deliver) the highest level of customer service, maintaining communication and documenting every step of the development with a clear timetable and sign off process, with requirements from each party, so we always knew where we were in the every aspect of the build. It could not have been better - the programme was delivered on time and on budget.

Their continued calm support, developing a library of simple "How to" videos enabling our admins to maintain and update content on the site has been invaluable. I would recommend them without hesitation.

You can find out more about which cookies we are using or switch them off in settings.

This website uses cookies so that we can provide you with the best user experience possible. Cookie information is stored in your browser and performs functions such as recognising you when you return to our website and helping our team to understand which sections of the website you find most interesting and useful.

You can adjust all of your cookie settings by navigating the tabs.

Strictly Necessary Cookie should be enabled at all times so that we can save your preferences for cookie settings.

If you disable this cookie, we will not be able to save your preferences. This means that every time you visit this website you will need to enable or disable cookies again.

This website uses Google Analytics to collect anonymous information such as the number of visitors to the site, and the most popular pages.

Please enable Strictly Necessary Cookies first so that we can save your preferences!